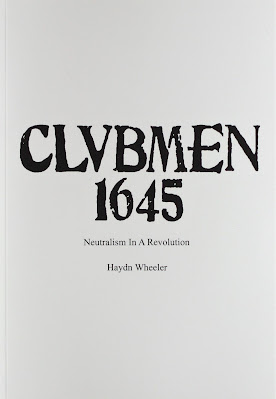 Neutralism in a Revolution  If you offer to take our cattle, be assured we will bid you battle. Dorset Clubmen slogan  1645  The Clubmen of the British Civil Wars are still quite a neglected subject for research. Possibly because they were local movements operating  only in  certain counties, armed neutralists who were determined to protect their communities from rampaging soldiers fighting for either side. Sometimes relegated as being merely a 'product of the war'. It is possible to write whole histories of the British Civil Wars and omit them.  Yet their activity is a potent reminder of war. Of communities  having bands of soldiers foisted upon them, demanding supplies, horses, money, sometimes plundering and abusing, and deserve not to  just be relegated into some sort of footnote . This book reminds us that forced conscription was another unwelcome consequence of the conflict. For example one reads of the Royalist commander Sir Thomas Lunsfo
Post a Comment
Read more

Ben Johnson's Volpone , and the Gunpowder Treason part one

Volpone ( first performed  1606 )  Have been reading'Ben Jonson, Volpone  and the Gunpowder Plot' by Richard Dutton (Cambridge University Press, 2008). In some respects, such a study is a paradox :Volpone's greatest strength is that it is basically a fable that exposes greed and folly, therefore has a timeless appeal . I am not necessarily convinced that 'Volpone' is directly connected to the Gunpowder Treason. But a valuable work nevertheless.                                  ' Volpone'  Illustration by Aubrey Beardsley,1898. Courtesy Wikipedia Netherlands,   Ben Jonson was quite a personality.  A scholar, a builder's apprentice, a soldier, actor, playwright, poet. An Anglican who became a Catholic for a number of years, then changed his mind. He killed at least two other men, one who was  fellow actor Gabriel Spencer in 1598. Jonson was nearly executed as a result, but plead benefit of clergy and got away wit
Post a Comment
Read more 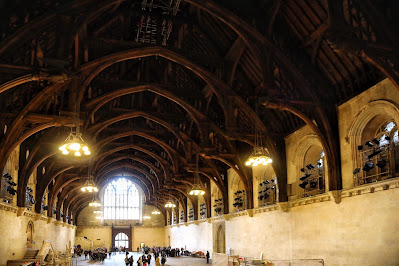 What was the real conspiracy ?                                                   Photo  of Westminster Hall kindly donated by  Gareth Nolan. Recently read  'Guy: The Truth About Guy Fawkes' by Michael Fitzalan  A long quite involved novel, with huge chunks of history thrown in. Based on the notion that the Gunpowder Plot did not occur as a hideous treasonous conspiracy with the intention of devastating Westminster.  In this novel, a group of Catholics facing huge fines for refusing to attend Anglican services, some of them already punished for taking part in the Essex Rebellion of 1601, launch a money making enterprise, partly centred at Westminster. A feasible notion as cellars and undercrofts by the Houses of Parliament were rented out for commercial purposes. They also have the use of Holbeche House in the West Midlands.  Robert Cecil , the Secretary of State, essentially manipulates the conspirators to further his own anti-Catholic agenda. There are n
Post a Comment
Read more 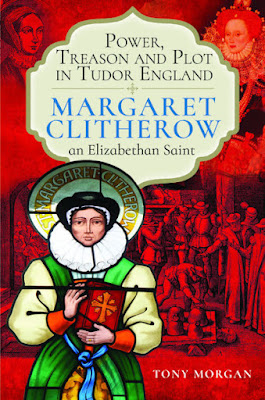 Power Treason and Plot in Tudor England  The first non-fiction book from Tony Morgan who lives just outside York. Mr Morgan has already had three novels published. Two concern alternative history outcomes to the Gunpowder Treason, another 'Pearl of York', is a fictionalised life of Margaret Clitherow, which also features a youthful Guy Fawkes.   Margaret Clitherow is most known for her refusal to plead either guilty or not guilty to a charge of harbouring  Jesuit priests in York in 1586. Her sentence was to undergo a punishment known as Peine forte et dure  . This entailed being stripped naked, a stone placed behind her back, a door laid across her, then weights were added to it. Was all carried out on 25th March 1586 at Toll Booth, Ouse Bridge, in York.  Margaret Clitherow was declared a saint in 1970. It must be said that this was an exceptional punishment, and that there is no evidence that Elizabeth I was aware that this sentence was due to be
Post a Comment
Read more

Something a little different 2022 -Save the London campaign

An interview with Mark Beattie- Edwards  Was pleased to interview Mark Beattie-Edwards of the Nautical Archaeology Society ( NAS) by email as a follow up to my earlier  Save the London appeal  post. From my original piece : The 'London' had taken on board men and provision ready for fighting, then moored near Southend  when its magazine  suddenly exploded on 7th March 1665. Samuel Pepys' Diary entry for the following day describes casualties of "above 300" , which is still the accepted figure, and reported the "ship breaking all in pieces" . The latter claim is not quite accurate, the blast impact caused a major part of the ship  to split away and sink 2 miles from its moorings,  The wreck of  the 'London' was re-discovered in 2005 lying in the mud of the Thames Estuary. The London never got to fight in the Second Anglo-Dutch War.  1) It has been a year since this blog covered 'Save the London' , What has  been happe
Post a Comment
Read more 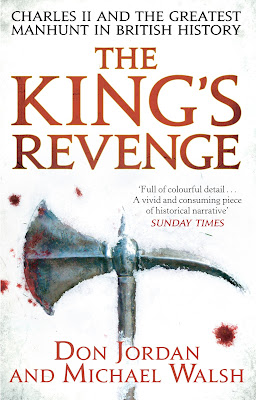 Book Review  'The King's Revenge' , about Charles II attempt to punish those that he held responsible for the execution of his father Charles I, was first published in 2012. The first book devoted wholly to the regicides appears to be Mark Noble's 'The Lives of the English Regicides;And other Commissioners of the Pretended High Court of Justice. Appointed to sit upon their Sovereign, King Charles I' from 1798. Since 2012 Charles Spencer's .'Killers of the King ' (2015)  and James Hobson's ' 'Charles I Executioners' (2020) have been published. Following a discussion in The British and Irish Civil Wars Facebook group on this subject, thought that it was time to highlight 'The King's Revenge' .  Kings had been removed from power and killed before 1648, in both England and Scotland. This book shows that the trial of Charles I, opening on 20th January 1649, was to be a rather different aff
Post a Comment
Read more

Montague ('Monty') Rhodes James (1862 - 1936) , renowned Medieval Scholar, one time provost of King's College Cambridge, is probably best known as M.R.James, the writer of ghost stories. His tales are regularly dramatised for television and radio. M R James' fiction has also become a major influence on the modern day 'Hauntology' movement.       'George Jeffreys, 1st Baron Jeffreys of Wems 'Attributed to William Wolfgang Claret, Public domain, via Wikimedia Commons                                            The M.R.James  ghost story 'Martin's Close ' concerns a murder committed in 1684 , and dominated by a London trial featuring Judge Jeffreys before he became so  notorious. Jeffreys is most known as the 'hanging judge' who was let loose on the wretched rebel prisoners and supporters of the Duke of Monmouth's doomed 1685 rebellion. Particularly despised in the West Country.  Originally read out at one of M R Ja
Post a Comment
Read more
More posts